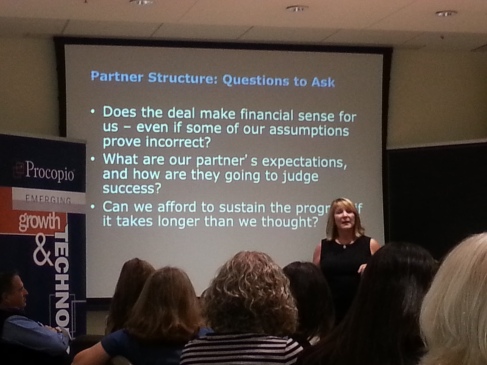 Today Heidi Roizen spoke to 35 female company founders including myself about learning from failure at Procopio law firm in Menlo Park, Calif. The event was held by Women Startup Lab Meetup group.

In the early 80s she founded personal computer software company T/Maker and later sold it at a nice profit to the delight of her investors including VC Ann Winblad of Hummer Winblad Venture Partners.

This was an interesting time to be in software because it was before it was hot.  At the time Lotus Development was getting started and Bill Gates, a friend of Roizen’s, was also a frequent co-conspirator at fledgling PC industry events.

I actually did PR for Lotus for several years long after it was bought by IBM. While I was there it had been rebranded enterprise collaboration software and social business which was definitely a smart move by Big Blue.

After selling T/Maker, Roizen became vice president of developer relations at Apple Computer and after that, a partner at another VC firm before she joined DFJ. It was interesting to hear that she works part time for DFJ now, often from her home office.

During her talk on learning from failure, Roizen emphasized the importance of knowing the numbers behind your business as well as being realistic.

She had many great tips but highlighted three main things to avoid when starting a company.

1. RIGIDITY. Instead, be flexible and open to changing your plan based timely analysis of how things are going.  If you are not seeing the results, then quickly change up what you are doing in order to get them.

2. PERSONAL FINANCIAL RISK. Roizen said she has seen more than one entrepreneur declare personal bankruptcy as a result of borrowing money to exercise stock options (known as the ‘cashless exercise’) and then being required to pay that money back when the company does not live up to its early promise.  She says personal financial pressure can create a hidden agenda and lead entrepreneurs to make bad decisions.

3. ASSUME A DEAL WITH A BIG COMPANY IS THE PANACEA. She once invested in a company that partnered with UPS. The company placed way too much emphasis on the deal as a key to success. Things didn’t pan out exactly as expected.  In 20/20 hindsight, they realized that although it’s a hugely successful shipping company, UPS’s business reasons for doing the deal were not aligned with what would make the startup successful.

When I asked Roizen about hot technologies she immediately mentioned how mobile is ubiquitous and the importance for designing software for mobility. She also mentioned fellow DFJ VC Steve Jurvetson’s interest in the space industry pointing out the SpaceX launch that happened a few days ago.

The energy in the room during Roizen’s talk was high and I would like to thank Women Start-up Lab co-founder Ari Horie, my former coworker in IBM Storage in the late 90s, for working so hard with her team to put on such a fantastic venue.