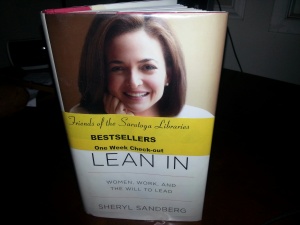 Lean-In by Sheryl Sandberg is on the bestsellers list at my local library this week.

One thing about Sheryl Sandberg’s book “Lean-In: Women, Work and the Will to Lead” that hit home with me was the statistic she mentioned in the chapter “The Myth of Doing it All.”

The main message of the book says is that it’s okay and even recommended that women, if they choose, take their careers to the highest level.

She is frustrated that there are so few women at the upper level of companies. She says that women tend to have less confidence than men and are each perceived much differently in the workplace. One way is that women who are tough are seen as bitches while men who are aggressive are seen as awesome.

Sandberg is wicked smart and has had senior executive roles at successful companies like Facebook. She was in the right places at the right times but at the same time, she worked hard and seemed to have the right attitude in advancing her career, which she says sometimes meant moving sideways instead of up the ladder.

Let’s go back to the topic at hand — the point she makes about guilt and the working mom. I like this fact because for most of the past 12 years, my son has been in day care while my husband and I worked.

In 1991, the Early Child Care Research Network, under the management of the National Institute of Child Health and Human Development, studied 1,000 children over 15 years. In 2006, the researchers released a report summarizing their findings, which concluded that “children who were cared for exclusively by their mothers did not develop differently than those who were also cared for by others.”

Sandberg goes on in great detail about how it can hurt children when you feel guilty and show stress about leaving them in daycare.

The truth is that children are fine and can even thrive when they don’t have a stay at home mom. I have seen proof as well. My son is funny, smart, and mature and has his act together. I had a lot of help raising him from YMCA and Walden West camps in the summers, and from on-campus daycare programs during the school years. Not staying home to raise him 24/7 didn’t hurt him one bit.

My son is going to basketball camp this week but instead of feeling guilty about it, I’m taking Sandberg’s advice. I feel fine and look forward to a super productive week serving my clients.

Sandberg actually repeats the message in different ways but it seems she likes this statement the best.

“Exclusive maternal care was not related to better or worse outcomes for children. There is, thus, no reason for mothers to feel as though they are harming their children if they decide to work.”

Thanks, Sheryl Sandberg for writing this book that is way overdue for the working moms.

The book is available on the best sellers’ shelves 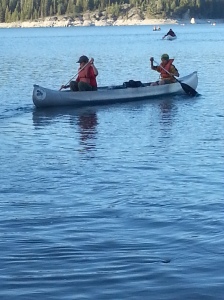