Lisa Guyman, founder of DrinkDrop finds other moms are supportive of her new business.

According to the State of Women-Owned Businesses Report, the number of businesses owned by women in the United States has gone up 59 percent since 1997. These companies generate $1.3 trillion in revenue and employ eight million people.

I looked up this statistic after noticing that a large number of women, particularly those with children, in my Silicon Valley neighborhood founded their own companies.

Parents Maitjian and husband Todd Welke started their IT services business CMIT Solutions of Southwest Silicon Valley three years ago.  Mom Nikki Brown has been a self-employed graphic designer and personal trainer for years. I have a son and started my high tech public relations consulting firm in January.

My next door neighbor Lisa Guyman has just jumped on the lady CEO bandwagon with her new company DrinkDrop (www.drink-drop.com) and she says the experience has been a good one.

“It’s been a lot of fun. I’ve had a lot of very positive feedback about our products, and I’ve been blown away with how supportive other moms have been. I think that’s the coolest part about being a female founder–the understanding from other women about the balance it takes to have a business and be a mom,” says Guyman.

A DrinkDrop is a frozen, two ounce individual size drink mix that contains whole fruits, vegetables, and herbs. Saratogans can purchase them at Gene’s Fine Foods.

Guyman says that all DrinkDrop mixes are designed to be combined with a particular liquor and club soda. A DrinkDrop cup is provided to measure the rest. The all natural drink concoctions are also good without alcohol, Guyman says.

Guyman says you can keep DrinkDrop mixes in your freezer, and when you feel like a drink, just drop one in your glass. In seconds, you’ll have an attractive and tasty specialty drink.

Her husband Jeff Guyman came up with the idea after the couple held a wedding reception in their Saratoga backyard for her brother and sister-in-law. They needed a way to serve special drinks to a large number of guests.

Lisa is keeping busy promoting her company. She recently hosted a tasting table at Gene’s Fine Foods. Distillery 209 of Pier 50 in San Francisco is sponsoring the next DrinkDrop tasting event at the San Francisco Ritz Carlton on Sunday, August 25. The details are on the DrinkDrop website.

Like other female CEOs, Lisa Guyman is master priority juggler. She and Jeff have a one year old son, three year old daughter, and two rambunctious and just as adorable chocolate Labrador Retrievers. She holds an undergraduate degree from University of California Berkeley and a doctorate in physical therapy from University California San Francisco. She also ran Cal Bear track.

Husband Jeff Guyman also has an impressive resume. He is a sales executive for a local power supply company and a Stanford University graduate who used to both swim and play water polo there. At one point he was ranked the number one water polo player in Washington State.

However, Lisa tells me that Jeff is totally focused on his 9 to 5 sales job so she started the company and handles the details herself. Due to the uniqueness and quality of her product, she is realizing that there is a lot to do to fill demand.

She elaborates on this point by saying, “These days, there is a big trend toward fresh herbal cocktails and mixology, or drinking your garden. We take all the work out of it and just say here, have a great cocktail and feel good about what you’re drinking.”

For additional information about trends in female leadership, read my review of the book Lean In: Women, Work and the Will to Lead here.

Note: This story was originally published in the Saratoga Patch community newspaper in August and as of today, it has received 146 likes on Facebook.

This is what a DrinkDrop looks like. It’s quite small so you can fit a lot of them in a freezer. 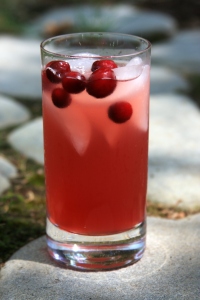 Hummingbird Nectar is a delicious, attractive and trendy DrinkDrop option.