Facebook recently announced it was buying WhatsApp for a whopping $19 billion. WhatsApp is valuable because it has 450 million users and is adding one million new ones per day according to the company.

The app allows people to send each other text and photo messages via the Internet, and will help Facebook grow stronger in the mobile market. A Time article described the deal as “epic” due to the humongous price paid.

Many billion dollar companies have blossomed recently because their apps have been adopted by a huge amount of people.

And when an app becomes very popular, it can turn into a platform. Facebook, Salesforce.com and Twitter are all platform companies. Other companies make apps that work with them, making them even more popular and innovative.

Developing, building the ecosystem for and monetizing apps and platforms were topics discussed at the SVForum event “Apps to Platforms” Thursday, February 20th, at the McEnery Convention Center in San Jose.

About 150 people made up mostly software start-up founders and developer relations executives from large companies like Dell, IBM, Google and Microsoft, and a few consultants like me attended.

Here are some of the other comments from the panelist and keynote speakers.

In the first panel, Adrian Cockcroft, technical fellow, Battery Ventures and Netflix’s former cloud architect said, “There are three questions to ask when developing a killer app. They are, ‘Is it easy to use? How will it spread, and how do you monetize it?’”

Randy Heffner, vice president, Forrester Research says that the granddaddy of APIs, which are tools that help the software programs talk to eachother, Amazon.com took off because it opened its API to mom and pop and boutique websites and blogs. He emphasized the link between APIs and the concept of the internet of things, or how many automated things in our lives are connected.

However, Heidi Williams, director of platform engineering at Box, cautioned, “If you give people all the control in the world, it can lock you in later.” She added that Box’s platform strategy is to build, distribute and monetize.

Saad Khan, Partner, CMEA Capital, who started as an intern at IBM alphaWorks team in the late 90s when I was also working at Big Blue, elaborated on the importance of connecting the software dots. “We’re going to an automated world where everything is modular and connected,” said Khan.

Another keynote speaker stressed the importance of ecosystem in creating innovation. “A platform is a lot more powerful when you can get someone else to build it,” added Matt Thompson, general manager, developers and platforms, Microsoft.

John Wolport, IBM’s Seeker of Awesomeness (his actual title), and creator of its unique Extreme Blue internal incubator program says that a company like Big Blue adds integrity and helps with partner engagement. 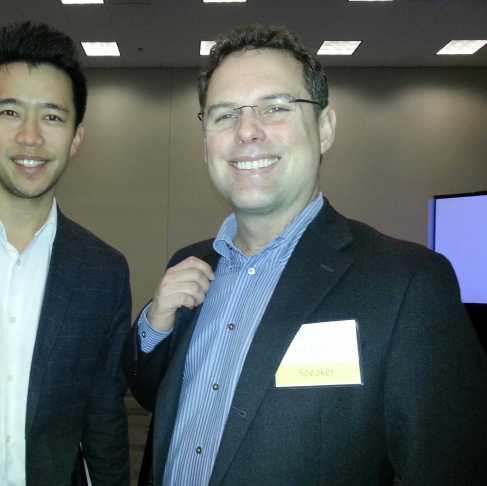 An audience member asked him, “How can start-up founders and big company workers get along? Their situations are so different.”

Wolport said that there are a lot of entrepreneurs within IBM they are not so different after all.

John Sheehan, CEO, Runscope, stressed the importance of platforms saying simply, “They bring you an audience.” Sheehan used to work for Twilio, which started as platform which is uncommon.

SVForum is an organization that fosters networking and best practices among members of the technology startup community. The group recently moved its office to San Jose from the North Bay. Its new CEO is Ms. Adiba Barney. @SVForum on Twitter.

Michelle McIntyre is a public relations consultant, executive member of TEDxSanJoseCA, director with the Silicon Valley International Association of Business Communicators, and an IBM vet. @FromMichelle on Twitter

The photos were taken by Michelle McIntyre. They are of, in this order, Saad Khan, Partner, CMEA Capital; John Wolport of IBM; and project managers at the uTest booth.